Dr. Jae Hyun Park is a highly regarded, board-certified orthodontist with a strong commitment to clinical education, patient care, and research. He moved to the Valley in 2006, where he has been treating patients ever since. He is also a Professor and Chair of the Postgraduate Orthodontic Program at the Arizona School of Dentistry & Oral Health (ASDOH). He received several awards for scientific and clinical excellence, including the Charley Schultz Award (first place winner in the scientific category at the Orthodontic Resident Scholars Program) and the Joseph E. Johnson Award (first place winner at the Table Clinic Competition) from the American Association of Orthodontists (AAO).

The AAO also appointed him to be the recipient of the AAO Academy of Academic Leadership Sponsorship Program (AALSP) Award for 2010. He was selected as one of only four recipients from among those nominated by the accredited orthodontic programs in the United States and Canada. He is a Diplomate of and Examiner for the American Board of Orthodontics (ABO).

In addition, Dr. Park was selected to serve as the lead judge for the 2013 Intel International Science and Engineering Fair, which was held in Phoenix. He judged on behalf of the American Dental Association Foundation (ADAF) and presented Special Awards representing the ADAF Organization.

After moving to the United States, Dr. Park earned a Master of Science degree from the Graduate School of Arts and Science at New York University, College of Dentistry (NYUCD) and completed the Postgraduate Orthodontic Program there, received the Dean’s Award, the 1st place Master of Science Residency Research Award, and the 1st place Postgraduate Resident Research Award. Some of his research was submitted for a patent by New York University.

Dr. Park gained hands-on experience during almost 10 years of service as a general dentist and orthodontist in Korea. While maintaining his practice, he also served as an assistant professor at the Graduate School of Dentistry in Kyung Hee University and was recently appointed to do research as an International Scholar with the school.

Dr. Park also worked as an orthodontic teaching fellow and member of the undergraduate clinical orthodontic faculty at NYUCD. He represented the school at the 2006 AAO annual session, where he competed against 47 other orthodontic representatives and won 1st place in the Orthodontic Resident Scholars Program.

While working as a full-time faculty member since 2008, he has published more than 260 scientific and clinical articles in peer-reviewed orthodontic and dental journals, including five cover pages in the AJO-DO, three cover pages in the JCO, three books and 22 book chapters, in addition to fulfilling his teaching and administrative duties.

Dr. Park also lectures nationally and internationally. He represented the AAO at the 2018 ADA Annual Session, where he presented a three-hour lecture. Dr. Park is currently editor-in-chief of the Journal of the Pacific Coast Society of Orthodontists (PCSO) Bulletin, past president of the Arizona State Orthodontic Association, and thesis committee co-chair of Northern California Edward H. Angle Society of Orthodontists. He also works for the INBDE Ortho-Pediatric Dentistry/ADAT test construction committee and as CODA site visitor. He was recently appointed to the 2021 scientific program chair at the College of Diplomates of the American Board of Orthodontics (CDABO) annual meeting. In addition, he was recently appointed to replace Dr. Steven Dugoni as the American Board of Orthodontics (ABO) director representing the PCSO. He will be the ABO President in 2024.

Dr. Park has been recognized by Marquis Who’s Who, American Biographical Institute (ABI) and the International Biographical Center (IBC) of Cambridge. 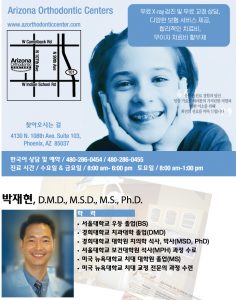 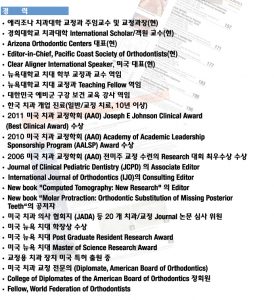 Our team at Arizona Orthodontic Centers is eager to meet your orthodontic needs! We love our patients! When you visit our office, our friendly and sincere team members will guide you throughout your treatments, ensuring that you are comfortable and at ease. We strive to give you and your family gentle and professional orthodontic care. To learn more about us and to set up your next appointment with our skilled orthodontist in Phoenix, Arizona, we encourage you to contact our office today.